Illicit drugs come in many forms, from legal prescription drugs sold illegally to drugs with no medical use made and sold only on the streets. Understanding which drugs are illegal and their potential for addiction can help individuals recognize their level of abuse and seek treatment when necessary. 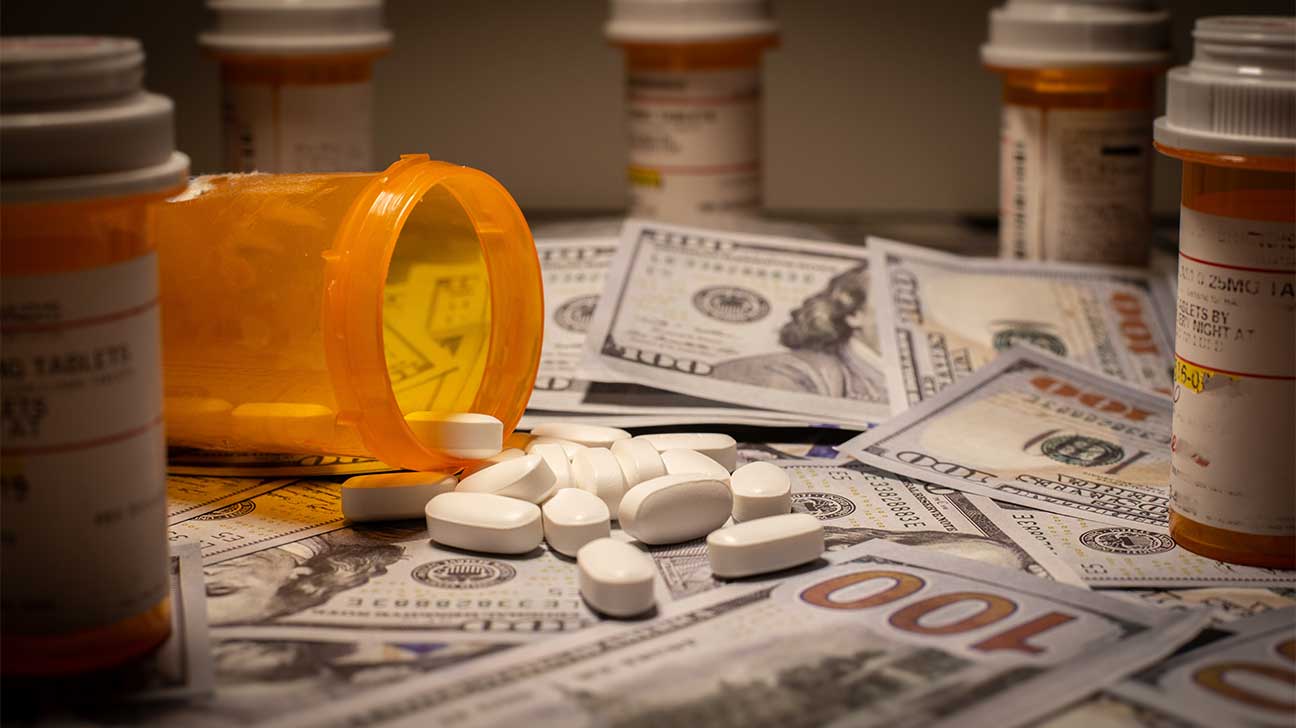 The use of illicit drugs is one of the most dire problems in the United States. In 2017, nearly 20 million Americans were struggling with substance use disorders.

Illicit drugs are often extremely addictive and using certain drugs of abuse only a few times can lead to dependence and addiction. Possession of many of these drugs can lead to criminal charges and time spent in jail. Prisons in the United States are filled with otherwise nonviolent convicts who were caught with even small amounts of illicit drugs such as crack cocaine.

For these reasons, it can be important to understand which drugs are illicit, or illegal, and which are considered highly addictive or dangerous. These drugs carry the highest risk for abuse, addiction, and dependence.

It’s important to understand that any drug sold on the streets is illicit/illegal. Any use of prescription drugs without a prescription, sold to someone who does not have a prescription, or used in any way other than directed is substance abuse.

Similarly, the use of an over-the-counter drug in any way other than directed or for the purpose of getting high is also substance abuse. Even marijuana, the one illicit drug which has been legalized in 33 states as of January 2020, has certain restrictions.

Among these restrictions is a limitation of the amount of marijuana that a person can possess one time. Exceeding the limitation is considered illegal. For these reasons, each of these substances can be considered an illicit drug.

The following substances comprise a comprehensive list of illicit (illegal) drugs in the United States:

Cocaine is a Schedule II drug. It’s a stimulant that produces an intense euphoria and has the potential to be very addictive. It is usually found in powder form and is snorted or injected after being dissolved in water.

Crack cocaine is cocaine base. It is packaged and sold in small, whitish rocks or chunks and is smoked. Like regular cocaine, it is a Schedule II drug.

Heroin is an opioid. It is derived from morphine, a natural opiate extracted from the seed of certain types of poppies. It is very addictive and comes in different forms.

Pure heroin is a white powder, but it can be a brown powder or a black, sticky material called black tar heroin. Heroin is often cut with other substances to make it last longer. It is a Schedule I drug, or the most addictive type of illicit drug.

Methamphetamine is a Schedule II stimulant drug. It can be cooked in “labs” using easily found and inexpensive ingredients. Regular methamphetamine, or meth, is a white powder, while crystal meth resembles shards of glass or small blue rocks. It can be swallowed, injected, smoked, or snorted.

Ecstasy, or MDMA, is both a psychedelic and stimulant drug. It is a Schedule I drug and is used largely by teens and young adults to reduce inhibitions and promote feelings of empathy and euphoria. Ecstasy is made in labs and mainly comes in the form of stamped, colored tablets.

Hallucinogens are drugs that alter a person’s perceptions and their mood. They are some of the oldest drugs used and abused by humans and can be synthetic or derived from plants or fungi. Most hallucinogens are Schedule I drugs. They include such drugs as LSD, ketamine, psilocybin, Ecstasy, peyote, and PCP.

LSD is a synthetic hallucinogen that is taken orally. Its proper name is lysergic acid diethylamide, and it is referred to as acid. Peyote is a spineless cactus that contains mescaline, a hallucinogen. Psilocybin is a type of mushroom.

Ketamine is an anesthetic that causes hallucinations. It is often a club drug. Though it has been used to anesthetize both animals and humans since the 1970s, it is now a Schedule II non-narcotic drug. PCP, or angel dust, is a hallucinogen notorious for causing violent behavior in some people who use it. It can be taken orally, injected, or snorted.

Marijuana is becoming legal to use recreationally in most states, though federally it is still a Schedule I drug. It is also used medicinally to treat the nausea associated with chemotherapy and for other disorders. It is derived from the cannabis sativa plant. Its effects are produced by THC, and it is usually smoked. Marijuana can also be put in foods or made into a tea.

Inhalants are volatile substances that are only abused through inhalation. Because these products are found in many household items, they are not scheduled. They include substances such as glue, cleaning fluids, paint, markers, and lighter fluids.

They are sniffed, bagged, or huffed. Bagging means the fumes are placed inside a plastic bag and inhaled, and huffing means that a cloth soaked with the inhalant is stuffed in the person’s mouth. Huffing can also mean inhaling laughing gas from inside a balloon.

Alcohol is not a scheduled drug but is regulated and prohibited for consumption by people under 21 in the United States. It acts as a depressant because it suppresses the central nervous system and helps people relax and become more congenial in social settings.

Unfortunately, it is also addictive. Many household products that have alcohol as an ingredient are also abused, even though they are never meant to be consumed. Some of these products are dangerous when consumed even once.

These products include perfume, rubbing alcohol, and windshield wiper fluid. Products that are ingested that contain alcohol are mouthwash, cough syrup, and extracts used in cooking, like cooking sherry. Some extracts are surprisingly high in alcoholic content.

Opioids are narcotics that are prescribed to relieve pain. They are taken orally, intravenously, or can come in patches. Some, like fentanyl, are powerful enough to ease the pain of people with terminal illness.

Unfortunately, these drugs, derived like heroin from the opium poppy, can be very addictive. Some doctors prescribe them too liberally, and when they stop prescribing them, desperate patients buy them on the street or “borrow” them from friends or relatives. If they can’t find these opioids, some people turn to heroin.

These are all Schedule II drugs.

Amphetamines are stimulants. Like opioids, they can be legally prescribed. They are used to treat attention-deficit/hyperactivity disorder. Unlike opioids, amphetamine prescriptions can’t be refilled. They are usually taken orally or injected, though crystal meth, which is derived from amphetamines, is smoked.

Types of amphetamines include:

Barbiturates are depressants. They are used as sleep aids, to relieve anxiety, and to prevent seizures. They include such prescription drugs as Seconal, Nembutal, phenobarbital, and Pentothal. Barbiturates such as Quaaludes and Rohypnol are not legally made or marketed in the United States.

Benzodiazepines were created to replace barbiturates, which are older drugs and have a high risk for addiction, though people can also become addicted to benzodiazepines. Barbiturates range from Schedule I to Schedule IV drugs.

Some drugs of abuse do not need a prescription to be bought legally. These include over-the-counter cough medicines, bought and abused because of their alcohol or DXM content. DXM, or dextromethorphan, has sedative, stimulant, and dissociative properties.

How Drug Schedules Are Determined For Illicit Drugs

The Controlled Substances Act places all drugs or substances that were regulated under previous law into five schedules.

The schedule is determined according to whether the drug is used medicinally, its safety, and its potential to be abused:

Here are some illicit drugs by drug schedule:

*These are considered illicit when used without prescription.

There are hundreds of drug and alcohol rehab centers around the country, and though many focus on alcohol and opioids, there are still a good number that treat patients who are addicted to substances on this list of illegal drugs. Get in touch with one of our treatment specialists today to find a drug rehab facility which meets your individual needs.

Medically Reviewed by
Johnelle Smith, M.D on March 5, 2020
Questions About Treatment?
Get confidential help 24/7. Fill out the form below for:
People also read
List Of Stimulant Drugs From Strongest to Weakest List Of Opioids From Strongest To Weakest Snorting Dexedrine