Transdermal patches containing fentanyl may be prescribed by a doctor or sold on the street on the illicit market. Misusing fentanyl patches can result in drug overdose and death. 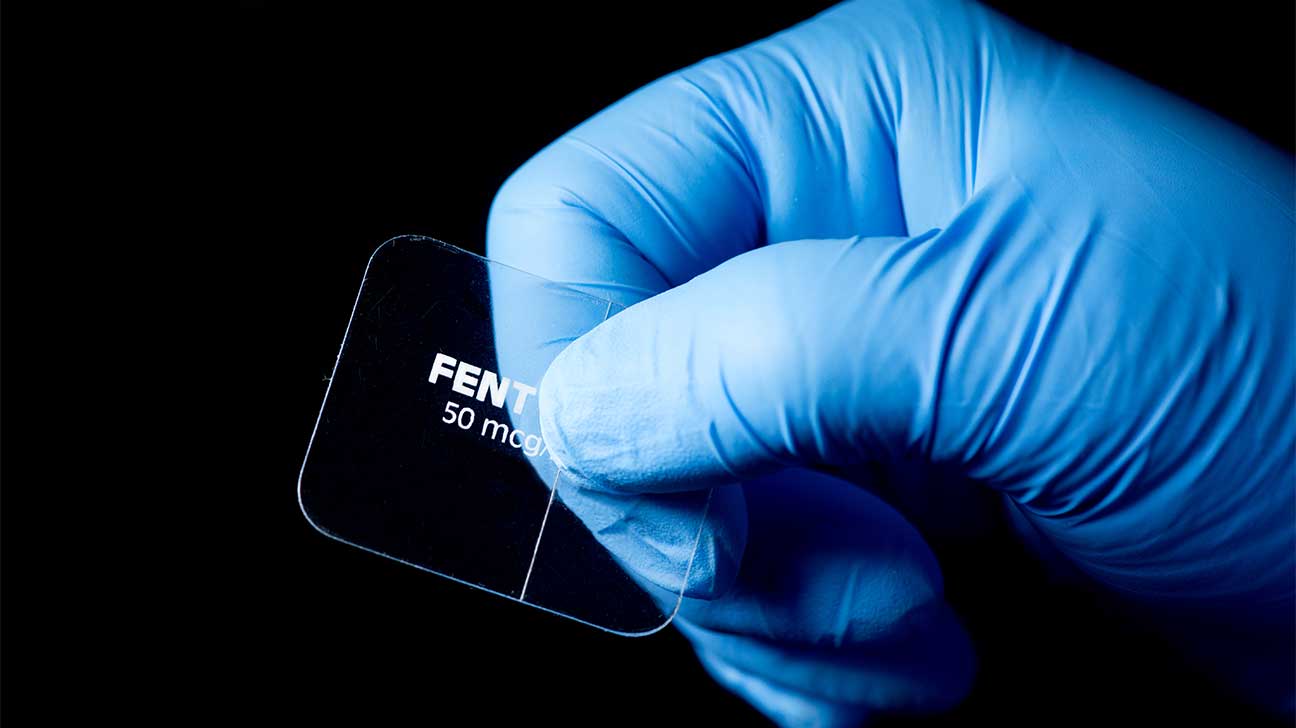 Fentanyl is a powerful synthetic opioid analgesic that is 50 times more potent than heroin. It can be ingested in a number of ways, including through a transdermal patch.

Health care providers may prescribe patches for pain management, but they also may be sold illicitly. Fentanyl abuse can lead to addiction or a life-threatening overdose.

Other types of fentanyl include lozenges, injectable liquids, and powders. Illicitly sold fentanyl can come in the form of counterfeit pills, patches, clear liquids, and more.

The Purpose Of Pharmaceutical Fentanyl

When used for medicinal purposes, fentanyl patches are a highly effective way to alleviate severe pain from disease, musculoskeletal injuries, or post-surgery pain.

Doctors may prescribe fentanyl for chronic pain relief. This could be due to back pain or other types of injuries that cause debilitating pain.

Pharmaceutical fentanyl was originally developed to help people with late-stage cancer pain.  Fentanyl lozenges, patches, and injections are some of the most effective anesthetics available.

The following are some of the most common ways fentanyl is used.

Fentanyl lozenges are similar in appearance to hard candy or cough drops. They can also come in the form of fentanyl lollipops (brand name Antiq) that have a suckable lozenge on a handle.

Liquid fentanyl may be administered through a needle and syringe directly into the vein. This method of use is one of the quickest ways to infuse fentanyl into the bloodstream.

Transdermal patches are prescribed by doctors and meant to be stuck to the upper arm. Once applied, a set dose of fentanyl will be administered throughout the day for pain relief.

The Proper Use Of A Transdermal Fentanyl Patch

Transdermal fentanyl patches are typically only given to opioid-tolerant people who have already taken oral narcotics.

Steps for using a fentanyl patch:

1. Remove the new patch from the sealed pouch. If the sticky part touches your hand, you should rinse the area immediately with clear water.
2. Apply the patch to a dry, flat area on the upper arm, chest, or back. If the patch becomes loose, it can be taped using first aid tape.
3. Remove the patch after 72 hours, or as directed by your physician, and discard the used patch.

Always keep fentanyl patches out of the reach of children.

If fentanyl patches are being used on young children, it’s recommended that the patch is applied to the upper back to reduce the chance of tampering.

The Illicit Use Of Transdermal Fentanyl Patches

Some people may attempt to misuse their prescribed fentanyl patches or purchase transdermal fentanyl on the street.

Due to the potent effects of fentanyl on the central nervous system and opioid receptors in the brain, abusing fentanyl can pose serious side effects including fatal overdose.

Symptoms of a fentanyl overdose may include:

In the event of an overdose, opioid antagonist drugs such as naloxone (Narcan) may be given to reverse the effects of an overdose and restore normal breathing within minutes.

Taking illicit fentanyl patches alongside other pain medications such as oxycodone, hydromorphone, or lorazepam may result in a range of adverse side effects including overdose.

Additionally, some antihistamines and vitamin supplements may cause adverse reactions when taken with fentanyl. Contact your doctor to learn more about fentanyl drug interactions.

FAQs On The Transdermal Fentanyl Patch

The useful information below may answer your additional questions about the fentanyl transdermal system.

How Long Does A Transdermal Fentanyl Patch Take To Work?

Fentanyl patches come in a number of doses and may take a few hours up to a day to start working. Most patches will continue to administer fentanyl for up to three days.

How Long Do The Effects Of A Transdermal Fentanyl Patch Last?

Fentanyl transdermal patches are safe as long as they’re used under the close supervision of a doctor or licensed caregiver, particularly among pregnant or breastfeeding women using fentanyl.

Fentanyl purchased on the street is never safe and can easily cause death after one use.

How Does A Transdermal Fentanyl Patch Make You Feel?

Similar to other opioid drugs, the fentanyl patch may make you feel intense euphoria, dizziness, nausea, and confusion. Some people experience constipation with fentanyl use.

Can You Overdose With A Transdermal Fentanyl Patch?

Yes. It’s important to only use the transdermal patch exactly as directed by the prescribing doctor to avoid addiction and potential overdose.

If you or a loved one are battling drug or alcohol addiction, help is available in the form of evidence-based treatment at a rehab center.

Call our helpline for more information about fentanyl transdermal patches. Our team can answer your questions and help you achieve lasting sobriety.