Meth Side Effects On The Skin (Meth Sores)

Meth is a highly addictive drug that leads to a variety of dangerous side effects including sores on the skin. These sores can lead to infection and other adverse health effects if not treated. 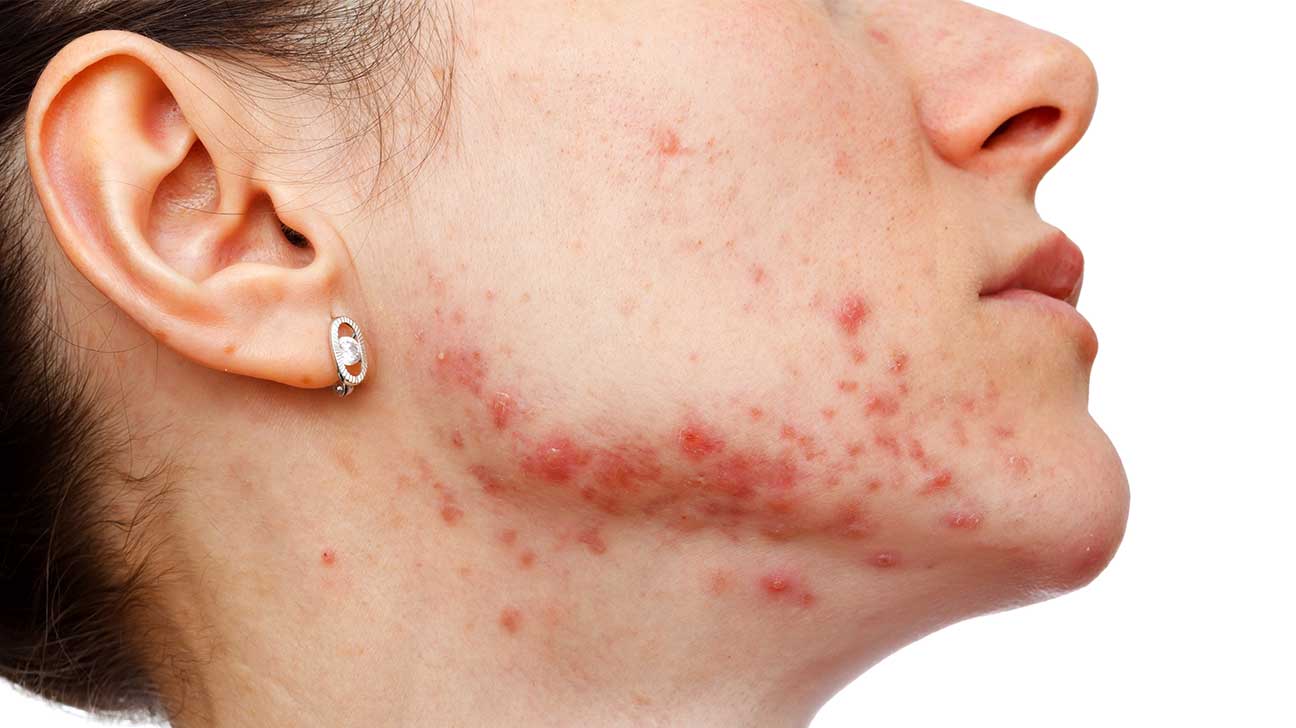 Methamphetamine is a highly addictive drug that can cause serious mental and physical side effects because of the corrosive chemicals that drug dealers use during the manufacturing process to give it its crystal-like appearance.

Meth abuse leads rapidly to addiction and can quickly deteriorate a person’s life. What many people find the most shocking about the way meth affects the body are the sores caused by meth effects on the skin.

How Does Meth Affect The Skin?

There are several different crystal meth side effects on the skin that can happen not long after a person starts taking this drug, the first of which are the sores that develop from scratching and picking at the skin.

Many addicted individuals say that when they are “tweaking,” they have no sense of time or reality. They scratch and pick the skin all over their body until the skin bleeds and becomes infected.

Most of the sores look like a bad case of acne at first glance. But upon closer inspection, it is easy to see how deep the wounds are. The skin of a person who is addicted to methamphetamine is also affected by the way that they tend to stop taking care of their personal hygiene. Weeks or months may pass by before they take a bath or even comb their hair.

Meth sores frequently occur because of the hallucinations that the drug causes. In an addicted person’s mind, they believe that their skin is covered with crawling, biting insects.

While they aren’t actually real, the person will still attempt to remove them by scratching and picking at their skin. Some severe hallucinations may even cause a person to attempt to cut the insects out of their skin using a knife or other sharp object.

How Meth Dehydrates The Skin

Meth dehydrates the skin by causing someone to forget about anything else but getting more of the substance. Days may pass by without them eating or drinking anything at all, which leads to severe malnutrition, weight loss, and dry skin. The chemicals in methamphetamine also lead to dehydration because of the damage that they do inside and outside the body.

One of the crystal meth side effects on the skin is skin irritation that causes frequent scratching. All over the body, the skin will appear to be dry, cracked, gray, and full of sores and lacerations.

Because getting more crystal methamphetamine begins to consume an addicted person’s every waking thought, they often struggle with homelessness or other related issues. This can cause them to live in an unsanitary environment that limits their ability to bathe, brush their teeth, or change into clean clothes.

Sometimes, the issue is simply that they don’t remember to do any of these things. Another way that crystal meth irritates the skin is through the harsh chemicals in the substance which seep out of pores when an addicted person starts sweating.

This condition causes the body to have a specific smell that is often recognizable to anyone who has worked with addicted individuals or had an addiction to the substance themselves.

Meth Damage On The Skin

Meth effects on the skin happen quickly, which causes a person’s outward appearance to deteriorate faster than normal. A person addicted to meth may seem to rapidly age. This can be seen by looking at photographs of people that were taken before and after their meth addiction began.

After just one year of meth use, a person might look at least 10 years older than they did the year before. If they manage to survive the stress that the drug causes on their mind and body during this time, their outward appearance will age substantially more for each year that follows.

Some people who are addicted to this substance get premature gray hair and skin wrinkles when they are less than 30 years old.

Effects Of Meth At Injection Sites

It is also possible for a person to develop meth sores if they inject the drug into their veins using dirty, bent needles. Most people who are addicted to meth prefer injecting the drug because this causes it to get into their bloodstream faster than it would if they snort it.

Unfortunately, this causes rashes and severe skin infections, like cellulitis, to occur. The skin will also become covered with noticeable scars from track marks over time. Injecting meth into the skin is dangerous because it can cause potential damage to the veins and skin.

The worst condition that can develop is gangrene, which occurs when the skin starts to die off from a lack of blood flow to an area of the body that has become damaged from a severe bacterial infection.

One type of bacteria that addicted individuals can be exposed to is methicillin-resistant Staphylococcus aureus (MRSA). It is dangerous because most antibiotics don’t affect it at all, which means that it can rapidly spread in the body, which may cause a person to die.

Other effects of meth at injection sites include:

Effects Of Meth On The Face

Meth causes sores on the face that start out looking like acne. When they become infected from unhygienic conditions and scratching, the centers of these sores will turn brown or black.

Sometimes, they will grow in size, which makes them look more like canker sores. As a person’s addiction continues, the amount of sores they have on their face will increase substantially.

Other effects of methamphetamine on the face are:

Meth effects on the mouth are sometimes called “meth mouth.” The symptoms of this condition include sores on the lips, rotting or broken teeth, damaged gums, and burn marks on the tongue and lips.

The damage of meth to the teeth is the most severe. In fact, it is common for someone who has an addiction to meth to need dentures when they are still very young.

Doctors believe that these symptoms are mainly caused by the corrosive chemicals in meth, such as drain cleaner, cleaning agents, and battery acid, that wear away at the teeth when the drug is smoked. But dry mouth, poor oral hygiene, and grinding the teeth while high on the drug are also contributing factors to meth effects on the mouth.

Can Methamphetamine Sores Be Treated?

It is possible for sores caused by methamphetamine abuse to be treated by a doctor if a person goes to a drug rehab center for help with their addiction.

A certified drug rehab program will get them safely through the initial detoxification process that will remove the drugs from their system, which will allow their body to finally be able to heal properly.

Trying to treat the sores while someone still has an addiction is very difficult because they won’t be able to take care of their health while they are under the influence of the substance.

Since most people who have an addiction to methamphetamine are often struggling with psychosis and hallucinations, it is often up to their friends and family members to get them admitted into a facility against their will. Anyone who needs more information about this process can contact one of our treatment specialists.