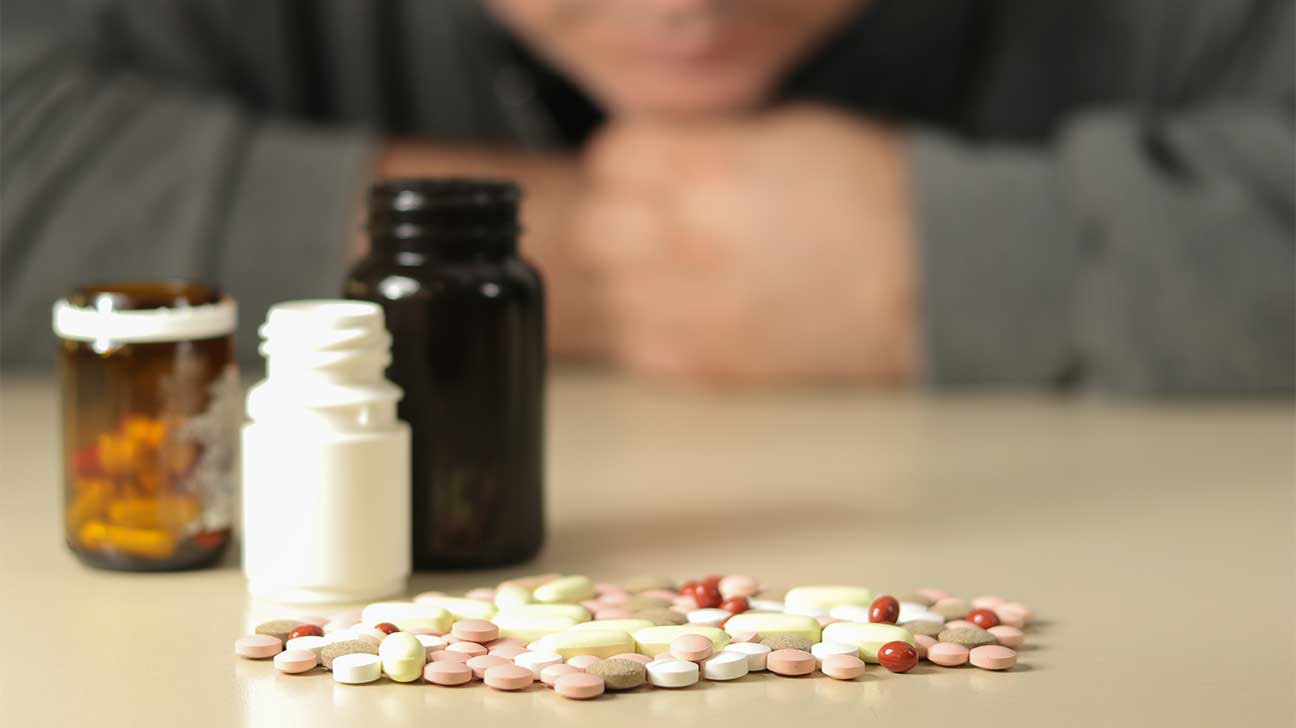 While not as pervasive as other types of drug addiction, antidepressant misuse affects millions of people and can cause various psychological and physical health issues.

Healthcare professionals do not typically consider antidepressants addictive, but they can cause physical dependence and mild to severe withdrawal symptoms when abruptly stopped.

People who use antidepressants recreationally may find relief at a drug addiction treatment center. Treatment options may include mental health services, detoxification, therapy, and more.

How Do Antidepressants Work?

Antidepressant drugs work by increasing neurotransmitters in the brain such as serotonin and noradrenaline. These chemicals can improve a person’s mood and emotions.

While the symptoms of depression and other mental health conditions may be treated with antidepressants, the underlying cause of the issue will not always be addressed.

Typically, people ingest antidepressants in tablet form. The dose prescribed is determined by the type of antidepressant, severity of depression, and overall health of the person taking them.

There are several types of antidepressants that work in different ways and feature different side effects.

SSRIs are the most widely used antidepressants. They are preferred because they usually cause fewer side effects.

The most common SSRI is fluoxetine, also known by the brand name Prozac. Other SSRIs include sertraline, paroxetine, and citalopram.

Tricyclic antidepressants tend to cause more side effects and are not as widely used as SSRIs. Common tricyclic drugs include nortriptyline (Pamelor), doxepin, and Norpramin.

SNRIs work by blocking the reabsorption of serotonin and norepinephrine neurotransmitters. This helps regulate mood and relieve the symptoms of depression.

Atypical antidepressants are used when SSRIs and SNRIs are ineffective. They work by balancing serotonin, norepinephrine, and dopamine neurotransmitters.

Commonly prescribed atypical antidepressants include trazodone, bupropion (Wellbutrin), and others.

MAOIs work by inhibiting the chemical monoamine oxidase in the body, which will allow more “feel good” neurotransmitters to remain in the brain and elevate mood.

Typically, MAOIs are avoided as the first choice for depression treatment, as they can cause severe side effects. Common MAOI drugs include Marplan, Nardil, and Parnate.

Below are some of the most common antidepressants on the market today.

This is a tricyclic antidepressant that is most commonly prescribed for the treatment of chronic pain. When misused, Elavil addiction can occur due to its euphoric and sedating effects.

Remeron belongs to the tetracyclic class of antidepressants and is used for depression, generalized anxiety disorder, and social anxiety.

While considered non-addictive, Remeron abuse can lead to physical dependence.

Strattera is the brand name for atomoxetine, an SNRI generally prescribed to treat attention-deficit/hyperactivity disorder (ADHD).

Strattera has a low potential for abuse but can cause several side effects including loss of appetite, dizziness, unusual dreams, and more.

Trazodone is a drug under the category of serotonin antagonists and reuptake inhibitors (SARIs). It works by increasing serotonin levels, which can help regulate anxiety and trouble sleeping.

People who misuse this medication are at risk for trazodone addiction, withdrawal, and overdose.

While Wellbutrin does not produce a high, people who abuse Wellbutrin can develop a physical dependence, which may lead to suicidal thoughts, intense cravings, and other issues.

Zoloft is the brand name for sertraline, an SSRI that helps treat mood disorders.

People who engage in Zoloft abuse may get psychologically and physically addicted to the drug. Common methods of abuse include snorting and intravenously injecting Zoloft.

Can Antidepressants Be Addictive?

Most authorities do not consider antidepressants to be addictive in the same sense that other drugs of abuse are, as they don’t typically induce a euphoric high when ingested.

There is, however, a range of addiction-like symptoms that people may experience when they chronically use or prematurely stop taking antidepressants.

Symptoms of antidepressant misuse may include compulsive use, drug tolerance, psychological and physical dependence, and withdrawal if abruptly stopped.

If you suspect antidepressant abuse in yourself or a loved one, you may be wondering what the difference is between being addicted to a drug, and being physically dependent on it.

Dependence is a term that is characterized by the physical tolerance and onset of withdrawal symptoms that may ensue if the drug is suddenly removed from the body.

If you’re taking a depressant drug as prescribed, you may become dependent on the medication. This is not necessarily a sign of abuse.

Addiction refers to a change in behavior due to biochemical changes in the brain. People with addictions are consumed with the thought of substance use regardless of the harm it causes.

It can be hard to distinguish between addiction and dependence, but most healthcare providers agree that dependence on a substance can quickly lead to psychological addiction.

One of the most common risk factors for antidepressant abuse is when people with mood disorders use antidepressants for their psychostimulant-like effect.

Other risk factors for abuse include:

Risks Of Mixing Antidepressants With Other Substances

Addiction to antidepressants may be rare, but people still attempt to heighten the effects of these drugs by engaging in polysubstance abuse or mixing antidepressants with other substances to achieve a more intense high.

People who mix antidepressant medications with alcohol may put themselves at a much higher risk of severe depression and suicidal thoughts.

Additionally, mixing alcohol and antidepressants can also increase the risk of an overdose in the form of alcohol poisoning, stroke, or heart-related issues.

Antipsychotics are used to treat psychosis, a condition that may cause delusions and hallucinations. People with schizophrenia and bipolar disorder may take antipsychotic drugs.

Usually, doctors avoid prescribing tricyclic antidepressants with antipsychotic meds, as they may trigger a psychotic episode or a severe bout of depression.

Mixing antidepressants with stimulants such as Adderall may cause a host of negative side effects, overdose, and other serious health issues.

In some cases, benzodiazepine drugs and SSRI drugs are prescribed together to reduce anxiety and improve adherence to antidepressant therapy.

Risks of mixing benzos with antidepressants may include addiction, harmful side effects, and worsening of depressive symptoms.

Some people may experience more intense bouts of depression when mixing sleeping pills with antidepressants.

It’s always important to talk to a healthcare professional before attempting to mix antidepressants, as some combinations may render both drugs ineffectual.

Mixing antidepressants with recreational drugs may cause anxiety, muscle spasms, and other undesirable side effects.

For example, when Zoloft and cocaine are mixed it may cause a life-threatening condition called serotonin syndrome, characterized by too much serotonin in the body.

Symptoms of serotonin overload may include anxiety, fever, excessive sweating, shaking, and delirium.

Side Effects Of Antidepressants

Side effects associated with antidepressant use can be mild to severe, depending on factors such as drug interactions and the health of the person using the medication.

Common side effects include:

It’s important to call a doctor immediately if you start to have thoughts about suicide, experience extreme agitation, or have hallucinations while taking antidepressant drugs.

People who take large doses of antidepressants may not experience a euphoric high, but some people do resort to abusing their antidepressants to cause a psychostimulant effect.

Signs of antidepressant abuse may include:

In 2004, the U.S. Food and Drug Administration (FDA) issued a warning for all SSRIs regarding the increased risk of suicidal thoughts and behaviors.

The majority of suicidality occurs among young adults ages 18 to 24. Clinical studies have since shown that there is no significant increase in suicidal ideation among adults older than 24.

SSRIs may increase suicidal thoughts due to the higher levels of serotonin in the brain, which can result in drastic mood swings and emotional turmoil.

There are ways to avoid antidepressant abuse including learning how to deal with peer pressure, seeking help for mental health disorders, and only using antidepressants as directed by a doctor.

Screening For Substance Use Disorder

One of the most effective ways to identify substance abuse is by getting screened for substance use disorders. These screenings can be accomplished at primary care centers, trauma centers, and other community settings.

Drug addiction screening can quickly assess the severity of substance use and identify the appropriate level of care a person will need to recover.

People battling drug or alcohol addiction can start on the journey to sobriety by receiving evidence-based or holistic treatment for substance abuse.

Behavioral health treatment options may include:

The information below may help answer your questions regarding antidepressant misuse and treatment.

Do Some Antidepressants Cause Weight Loss?

Some SSRI medications are associated with short-term weight loss, but will typically cause weight gain when used in the long term.

How Long Does An Antidepressant Stay In Your System?

The length of time it takes for an antidepressant drug to fully leave the body is about four to seven days. This may fluctuate based on age, sex, metabolism, weight, and other factors.

Drug detection times can be measured in a variety of ways, including through urinalysis, blood tests, hair follicle tests, and through saliva swabs.

How Long Does Antidepressant Withdrawal Last?

Antidepressant withdrawal may last five days to a few weeks, depending on the type of antidepressant, drug half-life, frequency of use, and severity of dependence on the drug.

What Is The Safest Antidepressant?

Some of the most effective antidepressants on the market are SSRIs as well as SNRIs. These are generally better tolerated than other options, and can also treat other conditions such as anxiety.

The most common among these “safe” antidepressants include Prozac, Paxil (paroxetine), Cymbalta (duloxetine), and Pristiq (desvenlafaxine).

How Long Does Antidepressant-Induced Mania Last?

Antidepressant-induced mania or hypomania occurs occasionally in people with bipolar disorder and is commonly described as episodes of heightened energy, creativity, and euphoria.

Mania can last a week or longer and may be accompanied by depressive episodes of varying lengths.

Should I Stage An Intervention For Someone With An Antidepressant Addiction?

Addiction intervention services can be an effective way to convince someone with antidepressant addiction to enroll in a substance use treatment program.

Is There Specialized Care For LGBTQ People With Antidepressant Addiction?

Are Teens At A Higher Risk For Antidepressant Addiction?

Teens are at higher risk for antidepressant abuse and addiction, based on findings made by the FDA.

Luckily, there are many rehab centers for teens throughout the United States to help adolescents with substance use disorders.

Call our helpline today for more information about antidepressant misuse and addiction treatment services in your area. Our team can assist you in reaching long-term recovery.